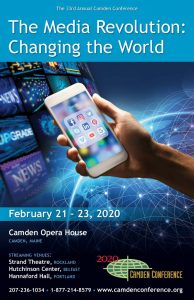 JOIN US FOR THE 33RD ANNUAL CAMDEN CONFERENCE

No country in the world has been immune to the 21st century media revolution.   A time when three networks and a daily newspaper presented Americans with similar stories and commentary is behind us.  Today’s user of a personal cell phone and the Internet has immediate access to thousands of information sources from around the world. An individual also has the unprecedented power to share information that may or may not be true with millions.

Once hailed as a tool that would bring people and nations closer together, the Internet has also had the opposite effect, segmenting users into interest groups.  Relying on vast quantities of data, social media sites such as Facebook, Twitter, YouTube, and Google “microtarget” specific demographic and cultural groups.  Many observers of this media free-for-all see it as a threat to democratic institutions and individual rights, privacy and security.

Individuals or governments that want to disrupt their own societies or others exploit the freedom of media to set one group against another or to sway an election. Some websites appeal to emotions, including fear.

Join us to learn how technology is shaping the flow of information and how it is used. Where do people in most countries get their news and other information? Will traditional media survive, and in what form?  How are visual images especially effective in shaping our understanding of political and social issues?

How can journalists and the public discern what is misinformation, disinformation, or malicious distortion?  How are hostile countries such as Russia weaponizing media to influence politics and elections?

When repressive governments or special interests target journalists, how can journalists operate? What role are social media playing in political movements around the world?

Who should bear responsibility for media content?  Is regulation of the media – especially of social media – a good idea?

The Camden Conference will be available as a livestream at: