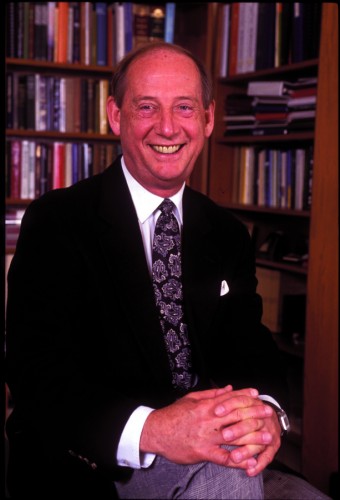 Frederick E. Hutchinson, a native of the rural Maine town of Atkinson, who graduated from the University of Maine in 1953 and later became his alma mater’s president, died April 7, 2010, in Bangor at the age of 79.

The first member of his family to attend college, Hutchinson earned an agronomy degree from UMaine, followed by a doctorate from Pennsylvania State University. He served UMaine as a professor, dean and vice president before leaving to work for the U.S. Agency for International Development. Hutchinson returned to academic work at The Ohio State University where he served as provost.

He became the 16th president of the University of Maine on April 1, 1992, serving in that role until his 1997 retirement. Before leaving office, he worked with Charles Cawley, then CEO of MBNA to establish an outreach center of the University of Maine in Belfast. The Center grew from its beginnings as a public-private partnership with the strong support of Fred Hutchinson who continued his support of the Center by establishing an endowed scholarship for Hutchinson Center students.

At its dedication in October, 2000, the Center was named the Frederick E. Hutchinson Center in his honor. The Center, which opened in 2000, continues to bring University of Maine classes and outreach programming to midcoast Maine.

UMaine President Robert Kennedy states, “We were proud to name the Hutchinson Center in Belfast for Fred, and I know that he was delighted with the positive impact that facility is having on midcoast Maine and the people who live there. It is a fitting legacy to a great Mainer who stood for creating the kinds of opportunities that led to his own success.”

“Fred Hutchinson was a friend and mentor who exemplified the University of Maine experience,” says UMaine President Robert Kennedy. “He often spoke of the great opportunities that came his way only because he was able to earn a UMaine degree, and he was deeply honored to serve as the university’s president. Fred Hutchinson was a distinguished leader whose example will continue to inspire UMaine students and others for many years to come.”

Hutchinson is survived by his wife Dione and two daughters.